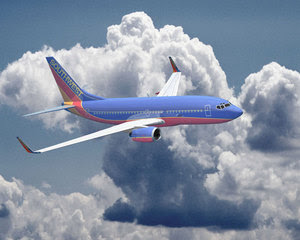 BeatTheChip will be in El Paso for the Texas Senate Committee hearing on The Real ID Act of 2005.
The bumpy flight was delayed 3 hours due to repairs taking place in Pennsylvania. TSA gave the customary accusatory look as I cleared the X-ray conveyor party with the use of A PASSPORT.   Pragmatically speaking, it doesn't make sense to explore the unique exasperations of TSA hassles over ID laws you are opposing on the way to a strategically timed hearing.  I can delightfully defer to blog reports here to How to Fly Without ID at a later time, for what it's like to show up at TSA without an ID and try to board a flight you paid for.
Austin's own  5-11 Campaign Committee members will be speaking during the hearing starting 8 AM at the El Paso Library Auditorum downtown.
In other news, more Maine Anti-Real ID petitioners took to the skies to advocate their positions on Real ID during Independence Day.
News c/o  Maine Time's Record
BATH, Maine - Bath's Heritage Days festival played host to one final push for petitioners hoping to repeal the state's Real ID law, which they say violates privacy rights guaranteed under the Fourth Amendment of the Constitution.
A plane soared overhead on Independence Day, towing a banner urging festival goers to sign petitions carried by an army of volunteers.  Marian McCue, communications specialist for the Maine Civil Liberties Union, said this morning she thought the group planned for 40 volunteers to visit Bath "at various points in the event."
Posted by Beat The Chip at 9:22 AM 0 comments

5 Signs You Are Dealing with Real ID

The Dangers of RFID Chips

Beat The Chip's Special Podcasts ACLU and The Repeal Effort