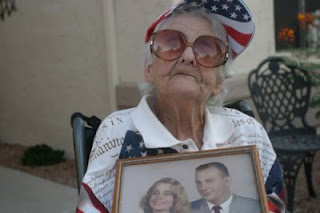 THE INDYPENDENT REPORTS
By Renee Feltz
From the October 3, 2008 issue
PHOTO: STOKELY BAKSH

VOTER SHUTOUT
97-year-old Shirley Preiss has voted in every election since 1932, but cannot register to vote in Arizona because she lacks proof of her citizenship. She was born in Kentucky before the state issued birth certificates and says she’s never left the country, so she does not have a passport. Arizona is one of eight states that require voters to prove U.S. citizenship.
PHOENIX—While both presidential candidates avoid discussing immigration reform, Republican pundits are stirring up concern about non-citizens throwing the election.

“The evidence is indisputable that aliens, both legal and illegal, are registering and voting in federal, state, and local elections,” wrote Hans A. von Spakovsky in June in a widely circulated “legal memorandum” entitled “The Threat of Non-Citizen Voting.”

Von Spakovsky is a former Bush recess appointee to the U.S. Department of Justice, where as counsel to the assistant attorney general for civil rights, he specialized in voting and election issues. After the Senate blocked his reappointment citing his involvement in “efforts to politicize the Department and use the Voting Rights Section to disenfranchise voters, rather than enforce our nation’s civil rights laws,” he served as a member of the Federal Election Commission for two years.

Now with the Heritage Foundation, a leading right-wing think tank, von Spakovsky argues the “honor system” of signing a legally binding registration card fails to keep non-citizens from the polls, and suggests election officials should be allowed to access U.S. Immigration and Customs Enforcement databases “regarding voter eligibility based on citizenship.” He also wants all states to require anyone who registers to vote to provide proof of U.S. citizenship.

Citizenship is already a legal requirement to vote in the United States, but GOP scare tactics have led more than a dozen states to consider additional legislation to require documented proof of citizenship, and in many cases a Voter ID card, in order to vote.

Voter registration rates in Arizona, the one state with both types of laws, suggest these cumbersome requirements will further disenfranchise low-income citizens, people of color and the elderly, all of whom are more likely to vote Democratic.

SCAPEGOATING IMMIGRANTS
Republicans first used outcry about undocumented immigration in the border state of Arizona to win support for a citizen initiative four years ago that requires voter registration applicants to document their citizenship with a birth certificate, a passport or naturalization papers.

“You had a confluence of two interests,” said Linda Brown, director of the Arizona Advocacy Network, when asked how backers of the initiative known as Proposition 200 overcame opposition from most of the public and the state’s elected officials in 2004.

The first force at work was the anti-illegal immigration movement. “These are the true believers,” Brown said. “Even though there is no documentation people are voting illegally, certainly not on purpose,” they will favor a crackdown on such behavior, she explained.

“Then you had the other group, the savvy political operatives,” Brown said. “They believe it is reasonable to deny law-abiding citizens the right to vote by shaving the rolls of people least likely to vote the way they want them to.”

When Proposition 200 passed there had been just 33 cases of documented voter fraud throughout the country between October 2002 and September 2005. Ten of the cases were acquitted or dismissed, and 19 of the 23 people prosecuted had registered to vote and voted using their real names — not the best method for getting away with fraud.

In fact, voting rights advocates say individuals trying to steal or cast an invalid ballot is less likely than being struck by lightning. The practice is even more rare among non-citizens.

“If you’re a non-citizen and you register or vote, there is a paper trail that connects you to that voting,” notes Justin Levitt, counsel to the nonpartisan Brennan Center for Justice at New York University. “If you’re convicted, which is a straightforward thing, you can be fined up to $10,000 and, probably most serious, you can be deported. For the majority of people, those odds just don’t make sense.”

TURNING A RIGHT INTO A PRIVILEGE
According to the Mexican American Legal Defense Fund, at least 38,000 voter registration applications have been rejected in Arizona since Proposition 200 went into effect in 2005, largely because of failure to document citizenship.

Outreach groups say that when they conduct registration drives voters often are not carrying their birth certificate, passport or naturalization papers.

“I was trained to do this job back in Detroit and it was so easy to get people registered because all I needed was people’s name, address and the last four digits of their Social Security number and their signature,” said Teresa Castro, political director for Arizona’s ACORN chapter, a group that has been working to register low-income voters. “But here in Arizona it got more complicated because you have to ask people to give up all this information to us.”

According to a phone survey commissioned by the Brennan Center in 2006, 7 percent of Americans lack ready access to proof of their citizenship.

“After Proposition 200, I feel like something that is a right is treated more like a privilege you have to earn,” said Teresa Castro, political director for ACORN in Arizona.

Access to documents like birth certificates and passports can be especially costly and difficult for low-income and elderly voters, like 97-year-old Shirley Preiss, who moved to Arizona in 2007 to be with her son, Joe Nemnich.

Preiss cast a ballot for Franklin Roosevelt in 1932 and has voted in every election since. Her Social Security card and several state-issued ID cards are of no use. She says Prop 200 violates her constitutional rights. “I have a legal right,” Preiss said. “It says so right in the book.”

THE ARIZONA MODEL GOES NATIONAL
Republicans say the problems faced by voters such as Preiss are a small price to pay.

“Every vote cast by a non-citizen, whether an illegal alien or a resident alien legally in the country, dilutes or cancels the vote of a citizen and thus disenfranchises him or her,” said von Spakovsky in his Heritage Foundation memorandum.

While Arizona’s law is unique, that could soon change. The chair of Arizona’s Republican Party, Randy Pullen, said he has advised supporters of similar laws in Georgia, Oklahoma and Colorado.

“It’s almost like we’re incubators in terms of what works and what doesn’t work on this issue. I’ve been very pleased with how this worked out nationally,” Pullen said. “And I expect … this will become pretty much the standard for most states.” Which states? “Red states,” he said.

Bills to require voters to show documented proof of citizenship narrowly failed this year in a handful of states where the GOP controls the legislature, such as Missouri and Kansas.

Virginia enacted a law that allows the registrar to remove “all persons known by him not to be United States citizens” from voter rolls after sending them a notice requesting sworn statement of citizenship that requires a reply within 14 days or the application or registration will be cancelled.

Supporters of Indiana’s Voter ID law cited voter fraud by undocumented immigrants as a reason for the U.S. Supreme Court to uphold the measure, which it did.

Eight states already require or request photo ID at the polls — Arizona, Florida, Georgia, Indiana, Hawaii, Louisiana, Michigan and South Dakota; Kansas and Pennsylvania require photo ID for first-time voters. Meanwhile, anticipation of voter fraud has become so ingrained that recent news articles have encouraged voters in all states to bring photo ID with them to the polls “just in case.”

As Bush-appointee von Spakovsky argues, doing “anything less encourages contempt for the law and our election process.”

21st Century Voter Disenfranchisement: By the Numbers
By John Tarleton

12: Percentage of voting-age citizens with incomes less than $25,000 per year who lack ready access to citizenship documents.

25: Percentage of voting-age African-Americans who do not have a valid, government-issue photo ID.

8: Percentage of voting-age whites who do not have valid, government issued photo ID.

15: Percentage of voting-age U.S. citizens earning less than $35,000 per year who do not have valid, government-issued photo ID.

10: Percentage of voting-age citizens whose photo ID does not have their current address and legal name.

18: Percentage of voting-age citizens age 18 to 24 who do not have photo ID with current address and name.

Source: Brennan Center for Justice, brennancenter.org
Posted by Beat The Chip at 9:42 AM 0 comments

5 Signs You Are Dealing with Real ID

The Dangers of RFID Chips

Beat The Chip's Special Podcasts ACLU and The Repeal Effort